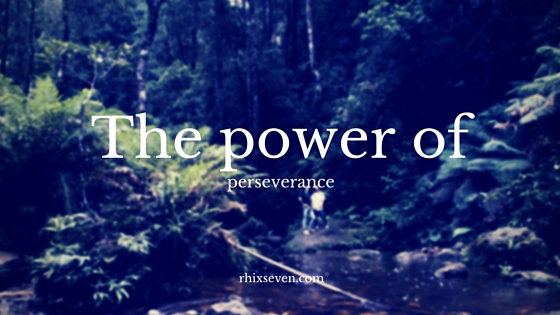 I feel that this is a fitting topic for my first post, given that I had every intention of my first post being months ago. With just under 10 weeks until the end of my final semester of my undergrad, the subject of perseverance has never been more prominent. For those who don’t know my story, here’s the Cliff’s Notes version: eight years, five educational intuitions, two countries, an Advanced Diploma and Associate of Arts Degree later – I’m finally going to have my Bachelor’s Degree.

A common phenomenon in the States is Senioritis, where high school seniors gradually become more apathetic towards their school work as the year goes on. To say I’m suffering from Senioritis is an understatement and I am constantly reminding myself how hard I  have worked over the past eight years and how if I mess it up now, I’ll only have myself to blame.

When I first started at UTS in the autumn of 2013, I discovered that the three years of university I had completed in the States along with my Advanced Diploma from TAFE only afforded me six subjects of Recognition of Prior Learning, or a semester and a half worth of credit. At 23 I was starting all over again from scratch and with only being able to take three subjects per semester, would spend the next three years at uni. I was devastated. The idea of not finishing my studies until I was almost 27 was disheartening and the idea of taking first year subjects with 18-year-old students fresh out of high school was painful.

Looking back now, I’m grateful for the journey that I have taken. The stopping and starting and working while studying part-time, I feel, has given me an advantage over other university grads who are stepping out into the world at 21 or 22. I have learned more about my chosen field because I have been able to apply what I’ve learned in a real context as I’m learning. I have also been able to apply experiences I’ve had while working and the skills that I have gained to my assignments. Sticking with my studies also meant that I was able to be a part of UTS Motorsports, which ultimately helped me answer the age old question of “What do I want to do when I grow up?”

There were certainly times when I felt like giving up. There was a period of around two years where family problems made it incredibly difficult to focus on anything but the personal issues that seemed to be unravelling my life in front of my eyes. I am still unsure how I managed to continue going to classes and not fail any of my subjects.

I have been taking my final semester one day at a time, in all honesty, I’ve taken most of the semesters one day at a time. I can finally see the light at the end of the tunnel, and it is the most agonising and exciting feeling rolled into one. It’s so close I can almost taste it, all as a result of never giving up.

View all posts by rhiveness